Momma’s got a brand new gig.

My friend and former editor Cindy Wolfe Boynton asked if I’d take charge of the National Organization of Women’s Connecticut chapter’s blog. I’m handling its content so Cindy can do other things, including running for state representative, teaching college courses, leading CT-NOW, advocating for adoptee rights, being a wife to her husband Ted, and mom of two young adult sons.

I’m sure that’s not all she’s doing, because she’s one of the busiest people I know. She wrote a play about her mother’s battle with Parkinson’s disease, has written a couple of books and leads a quirky walking tour called Spirits of Milford that visits famous ghosts sites.

She’s someone you want to be around because she’s on a mission to make the world a better place. Years ago, she asked me to sit on a committee to collect gifts, clothing and throw a Christmas party for residents at the Beth El Shelter, Milford’s homeless shelter. She also got me involved in a movement to open adoption laws in Connecticut so adoptees born before 1983 can access their original birth certificates. Cindy’s an adoptee, while I’m the mom of two adopted children. 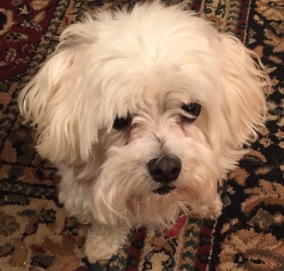 She’s a person who sees endless possibilities instead of obstacles. When Internet trolls took potshots at her for supporting Hillary Clinton, and entering the race for state representative, she kept their ugly comments on her Facebook feed. When I asked her how she deals with unkind remarks, she shrugged. “People can be so cruel. I guess I just let it roll off my back. I learned that from Linda Bouvier, my editor at the Milford Citizen. She didn’t let anything bother her.”

When I reminded her that Facebook is not a newspaper and she has the right to remove such comments, she looked as if it had never crossed her mind. She is the rarest combination of big-hearted yet tough as nails. I’m hoping a little of her resolve rubs off on me. I still remember every nasty remark anyone ever said to me when I was a reporter.

“So, what’s up? What are you doing, sitting at home writing blog posts all day?” she asked. “What’s the story with your blog? How did this whole thing come about?”

She’s always had the impression that I’m pampered, like a Maltese with a tiny ribbon in its hair with a jeweled collar and leash. And I suppose by some people’s standards, I am. I was lucky to stay home with my kids, but I know what it’s like to work and scrimp. I put my husband through law school on a $12,000 per year reporter’s salary. We qualified for free blocks of federally-funded cheese, and I bought paper towels one roll at the time.

I explained my blog is an outgrowth of my inability to find a job after being a stay-at-home mom for 18 years. I have a part-time job and volunteer, but my blog is my baby. I write every day, though 75 percent stays in the draft bin. I don’t make a dime off it, and I like it that way. If you want to ruin something, make it your job instead of your passion.

I blog to share my thoughts and take on life, to work out things that perplex, amuse, interest or move me. I don’t have an axe to grind. I just want to share my stories, and for you to weigh in if you’d like. I love feedback. It means you’re paying attention.

Like a lot of things in her life, Cindy has a great vision for the CT-NOW blog. She’d like to feature stories about women facing issues because of their gender. I wracked my brain for women who could be profiled over the next few weeks. And then I realized that I could have used CT-NOW when I launched my job hunt two years ago. I’m convinced I was dismissed as a job candidate for positions well beneath my pay grade because I’m a woman over 50 (OK, over 55, but who’s counting?)

I suspect I was a victim of sex and age discrimination, that when people looked at my college graduation year (1980) they thought, “Why is she applying for jobs when she’s nearing retirement age?” Job hunting at this age is humiliating. It’s even worse when the neighbor down the road tells you she’ll put in a good word, and you still hear nothing.

I believe that age discrimination is becoming as big a problem as sexual discrimination in this country.  Sally Koslow wrote a brilliant piece on this subject last summer in her piece entitled, “Hire A Woman’s Your Mom’s Age” in the New York Times. Reading her piece was one of the first assurances I had that I wasn’t a complete loser, that other women had tread similar paths and survived.

As my accounts to Indeed, Monster and LinkedIn sat woefully silent, I was flooded with news about new college graduates landing jobs for well over $100,000. I was happy for them, but dispirited and depressed. I found myself regretting my decision to stay home with my kids, and urging young moms to keep a foot in the workplace lest they never work again. I was haunted by the expression, “Out to pasture.”

At cocktail parties, I’d tell everyone that society has no respect for stay-at-home moms, that we’re viewed as second class citizens who spend all day watching TV, nibbling on bon bons and spending our husband’s (or partner’s) hard-earned cash. A part of me believes there’s still this perception, that we’re lazy and took the easy way out.

I’ve heard of women who have penned novels at kitchen tables, and painted murals while their kids were sleeping, but these are superwomen. Most of us just want to put up our feet and watch a TV show or read a book without being interrupted when the kids are finally in bed. At least that’s my goal.

Women need to realize that we’re all in this together, that when one woman is discriminated against, we all suffer. Over dinner with two couples, a woman I went to high school with complained about stay-at-home moms looking down on working mothers.

My former classmate is a divorced mom who worked full-time to support her two children. Despite her job duties, she made a point of attending school events. One day when showing up to a field trip, a stay-at-home mom glared at her and announced, “Oh look who showed up. Doesn’t Mrs. So & So look nice in her fancy boots?”

We’ve all been there, haven’t we? And sometimes it feels like we just can’t win. We’re all doing our best – holding down jobs, taking care of kids, parents, the house and the dog, and trying to carve out time for self-care. But the self-care more often than not goes out the window. Just ask any woman who plans to hit the gym after work, and has to skip it because of dinner, the PTA meeting or the book report due the next day.

I’m convinced that women hold the power to do great things if we unite and take more active roles in changing things. It’s easy to sit back and criticize, quite another to put yourself out there to affect change. I’m convinced mothers must take the lead in ending school shootings. Organizations like the Sandy Hook Promise are doing great work, but they can’t do it alone. We need to get out there and make our voices heard.

Carolyn Milazzo Murphy is blog editor for the National Organization of Women-Connecticut chapter. She is a freelance writer with more than 30 years experience in journalism. She writes the gsandwich.wordpress.com, and is active in many community organizations. She can be reached at carolyn.milazzo@gmail.com.

is what Edith Windsor said to a friend after learning about the success of her case.  It is nearly impossible to sit still […]